Posted by Redbourn Business Systems on Monday, January 30, 2012 Under: Fundraising & Gaming
A post from our Marketing Manager.

It was a good few months ago when I came across a really good blog post on fundraising via gaming from Caroline Howes on Spring Giving. I was aware already of War Child, an AdvantageNFP customer, and their ads on Football Manager a couple of years ago, as a football gaming fanatic (and through Redbourn Business Systems’ presentation on CHASE a few years ago) however I did not fully grasp that gaming could help fundraising substantially and the huge potential lying within online games. According to the post Call of Duty raised 250,000$ over one weekend for War Child!

Later, I saw Help The Hospices taking this one step further by offering a Santa game (Super Mario like) on their Facebook page, promoting the Santa Fun Run in December 2011, so in other words marketing their fundraising event through gaming. At approximately the same period came out Bird Life International and the incredible Angry Birds to support BirdLife International’s fundraising efforts and I can honestly say I now know much more about birds after visiting this page. I started to think this is no coincidence...there is some sort of “gaming conspiracy” here!

Lastly, I came across another AdvantageNFP customer’s (Handicap International), game Deminer via their Twitter and after talking to Tom from the charity I was very impressed to find out that the game has been out since 2003! He also told me that back then “Analytics” were not as accessible as today to monitor their game’s influence however he admitted that Deminer raised substantial awareness about landmines and cluster bombs, so no just fundraising. 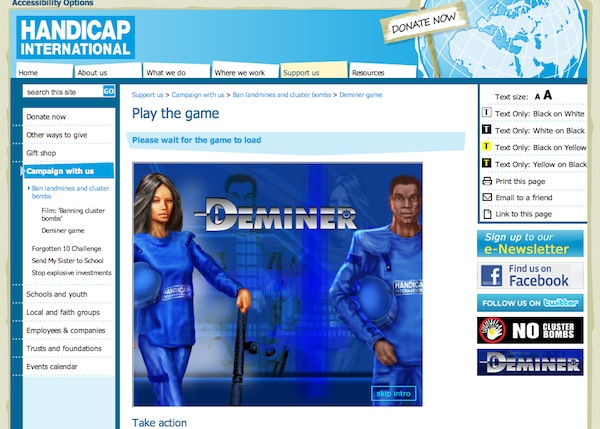 It is ever so clear now that the possibilities for fundraising and market awareness for charities through gaming are endless. What I would like to see though is the ultimate application of gaming for charities with a similar idea to RPG games such as World of Warcraft and Second Life...let’s wait and see then!

PS. If you’ve got some spare time do make good use of it and play these games – I can guarantee you there will be fun and lots of learning too.

This post was initially published on UK Fundraising on 16th December 2011.