Steve Cast Homeless for a night to raise funds for Herts Young Homeless!
When I was first asked to participate in a “sleep out” for the homeless my response was “sure, why not”.  When I realised they planned the overnight event for February, with temperatures below freezing, I started having second thoughts.  By the time I realised the event coincided with my 47th birthday I seriously began to wonder what I’d let myself in for!  Still it seemed one way to celebrate the passing of another year, and at least I had something to ask for as a present this year – a donation to charity!

One of our local churches, which is affiliated to my Scout Group, were planning the event to support the local charity Herts Young Homeless (www.hyh.org.uk).  Most of their work is with young people aged 16-24 who have had difficulty in securing and maintaining safe, secure accommodation.  That sounded like a really worthwhile cause, but to be honest I have little experience of homelessness, especially in young people; with my exposure to date having been limited to buying the occasional copy of the Big Issue or handing over my loose change.

By the time the day arrived I’d managed to gather support from another 3 adults and 15 of my Scouts, all of whom had agreed to give up their Saturday night and Sunday morning to “beg” for donations and to experience for ourselves what it was like to be homeless.  The weather forecast predicted a clear night, relief in a way that we wouldn’t have rain, but it would mean it would get cold.

Being Scouts we were preparing for any eventuality, and having collected a mountain of cardboard from the local supermarket we set about building shelters on the not so comfortable tarmac of the church car park.  Over the usual noises from a group of excited Scouts came two clear authoritative voices explaining how best to construct a shelter.  When I asked who the couple were, I was introduced to Stuart and Charlotte, who themselves had lived rough for several years.  Who better to advise on shelter building? Their knowledge and experience were invaluable.

Having sorted out our accommodation for the night we then had a chance to hear directly from Stuart how he had ended up firstly in care, and then on the streets, and how he’d turned his life around and eventually became a Church Youth Minister.  It was a moving story and a fantastic opportunity for us adults and Scouts to hear “first hand” about what it is really like to be homeless, to be poor and to face a life with no future.  In a “warts and all” group discussion we heard of a life where any substance that allows you to escape for a while is taken, with no questions asked, and the money needed to fund such habits is taken from wherever it can be stolen. 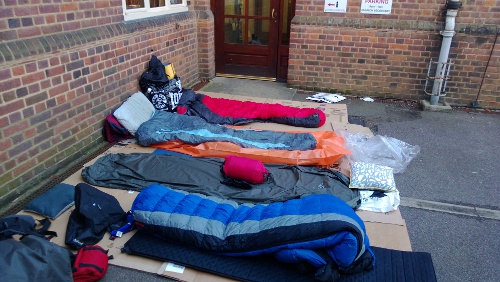 After a cup of soup and a jacket potato we then returned to our begging positions outside the church on the pavement, before turning in for the night at about 11pm.

I slept surprisingly well, waking at around 5am to find a clear sky with stars twinkling down.  I must have fallen asleep again because next thing I knew it was 7am and sausage sandwiches were being talked of.  Looking down I saw that frost had formed on the outside of my sleeping bag, so it must still have been below freezing even at 7am.

Overall most of us slept quite well, all things considered and we all felt proud to have survived the experience.   Later, over a third cup of strong coffee and a sausage sandwich I looked around and noticed that Stuart and Charlotte weren’t there.  Having been homeless and sleeping rough for years, they’d sensibly decided the night before that they preferred their home comforts and had no need to experience homelessness again.  They’d moved on from that life, and that’s what it’s all about really isn’t it?

Steve slept rough as part of the Harpenden Methodist Church Sleep Out for Herts Young Homeless, raising around £400 in total plus Gift Aid for the charity.  He has no plans to celebrate his 48th birthday the same way ….. yet.